This is the central site for a long-term project to research, examine, and respond to the radical collective of writers, theorists, architects, and visual artists who operated in Paris between 1829 and 1835 under the names of the Jeunes France & the Bouzingo, and through them to build a critical understanding of French Romanticist subculture through the historical lens of a continuing politically vigilant Anglophone avant-garde. 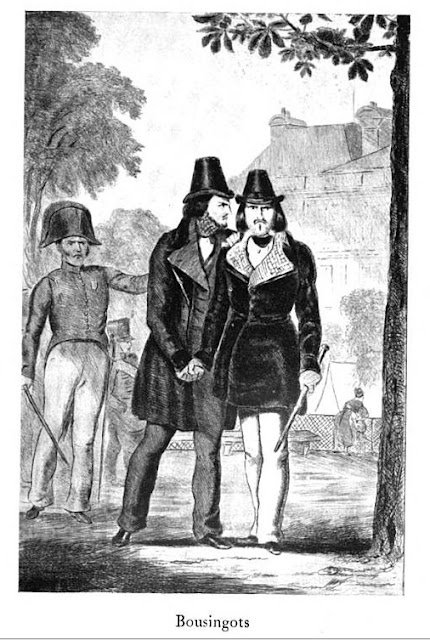 Though several members of the Jeunes-France / Bouzingo group have been canonized within either mainstream or avant-garde canons, their engagement with collective political action has been written out of their histories, and the bulk of material associated with the group, which is cited as a key influence by Lautréamont, the Decadents, the Symbolists, the Dadas, Surrealists, Lettrists, and Situationists, has never been translated into English. The occasional mention of them in English sources is relegated to vague panagyrics about their Bohemianism, without any rigorous examination of their political and intellectual motives or their complex relationships with broader proto-avant garde communities, utopian socialist politics, and popular mass culture.
The Bouzingo group emerged from the constantly merging, splitting and name-changing that has apparently characterised avant-garde culture since at least the 1820s. It grew essentially out of the Petit-Cenacle, renamed the Jeunes-France and later known also as the Bouzingo, to signal their plunge into a kind of politically motivated group social-experiment that seems to both mirror and critique other social experiments of the time, especially the Saint-Simonist commune that was founded at almost exactly the same time, and which at least several of the group were watching intently: The Jeunes-France lived collectively in voluntary destitution, their house devoid of furniture but filled with Bouzingo murals of Classical and erotic traditions, writing and spreading seditious drinking-songs at working-class pubs, plotting and carrying out various provocations of the bourgeoisie in the streets, experimenting with opium and hashish, orchestrating orgiastic parties involving dances requiring pistols fired into the ceiling, holding philosophical debates nude in their back yard, hurling fake corpses from their windows into the street, engaging in various occult and alchemical practices, and carefully cultivating an elaborate gothic mythology about themselves, in which they drank wine from their parents' skulls, stocked their otherwise bare rooms with exotic weaponry, and kept human fetuses in jars on their mantelpiece.

At the same time they were producing a very wide array of work in a number of different media, often collaboratively--from gothic novels to classical sculpture to politicized plays and operas to translations from French and German to erotic prints to buildings (I've yet to find any examples by the Bouzingo architect Jules Vabre) to history paintings to Byronic poetry to opaque prose poems. This heterogenous, multifaceted output  coheres in sometimes unexpected ways (insofar, again, as I can tell via google translate) through aggressive intertextuality and mutual reference, shared tropes deployed in very different ways, and their various debts to a shared and very idiosyncratic set of cultural contexts and resources: various forms of Post-Robespierre, pre-Marxist socialism, popular gothic fiction, the dark Romanticism personified first by Byron (to whom the group's main organiser, Borel, was often compared), both literary and graphic erotica and libertinism, an element of genuine alchemical and occult investigation, the adventure novels of Scott and Cooper, French comedy, and satirical and polemic song.

In all of the printed work that I have unearthed and scanned, it is evident that there are numerous conversations being played out in these poems, and that both writing and publishing (as well as not publishing) were being conceived of not only (or even primarily) as outward products for a public, but as gestures within the social context of the group, as well as its relationship to the broader communities that intersected with it and with its own history and future.

It is also quite clear that future (as well as past) avant-garde communities were considered part of this more intimate audience; frankly it's rather uncanny to dig up these texts (more than once) and find an exhortation or reference to the future reader who will have rediscovered one's existence after having been forgotten to history for generations. More uncanny yet when Aloysius Bertrand even relates to me fairly accurately what the historical trail was that I followed to his discovery. There is a whole social poetics of epigraphs to be read in the literary work of this group. (especially when they can be read.)

These inferences, again, are based on my quasi-readings of material as it has been found and initially interpreted, and on widely scattered and isolated atoms of information. I update my sources, presentations and interpretations of the history as often as possible, but due to practical restraints on time; but research, is more advanced than what appears on this blog; in the meantime if you want to know in more detail what it is that I'm looking at in cobbling together this reconstruction of their activity, or to check that information important to your own research or interest has been made obsolete or expanded, just email me.

The list compiled below is derived primarily from those named by Philothée O'Neddy/Théophile Dondey in his 1862 public letter to the historian/archivist Charles Asselineau and by Petrus Borel in his 1831 Preface to Rhapsodies as belonging to his core network, asserting that, "It was made among you, you may claim authorship." This is supplemented by Enid Starkie's biography of Borel. Certain writers are sometimes associated with the group online, but though they were in many cases collaborators and friends of the group (and very much worthy of further reading and research), I have not found convincing documentation that they self-identified as part of it; these includes Aloysius Bertrand (Louis Bertrand), Xavier Forneret, Alphonse Esquiros, and Alexandre Dumas, with the caviat that he may very well, in fact, have early on self-identified as part of the first stage of the Pétit-Cénacle, but had clearly drifted apart from the group dynamic as their radicalism increased. It should also be noted that the Romanticist 'cénacles' (in the terminology used by self-defined avant-garde collectives c.1825-35) seem to have had porous edges; focused on cycles of social events: each had a 'core' group ("cénacle" means "inner-circe") who collectively hosted salons, parties, seances, and performance events held in homes for invited guests and friends of guests, who thus partook of the cénacle; membership blended out from this center to those who attended their Salons, "orgies," and dances, and those with whom they collaborated and supported; through this social activity, the group blended into the broader underground community as one node in a closely-woven network.

As far as has been ascertained, the change in name from 'Jeunes France' to 'Bouzingo' did not denote any fundamental change in membership, and in fact was initially a derogatory name applied to them by the Conservative/Monarchist press, which they then claimed by insisting on misspelling it. This temporary change in name did however seem to coincide with a change in direction of the psychosocial experiments that the group was engaging in (hence the reversion to the Jeunes France name in 1832 when the Bouzingo lifestyle became too psychologically destructive).

BE A PART OF THE RESURRECTION!

This project involves many intersecting elements: translation, interpretation, publication, research into many regions of literary, artistic, political, philosophical, and popular history, etc. This project is therefore also an attempt to mobilise a network of marginal and underground communities to cooperate in uncovering and shaping a part of their own shared history.

WE ESPECIALLY NEED HELP TRANSLATING. The few Francophones among have a tremendous amount of work in front of them and we've all got other lives. Please get in touch and we can get you some texts (or follow the links).

Other relevant areas of knowlege or study that intersect with the Bouzingo and which we are not experts in include Gothic subculture in late 18th/early 19th century France, French radical politics, Romantic music and musicology, theatre, dance, and song, and many other things.

This project is spearheaded, and initial products will be published by mOnocle-Lash Anti-Press. However, we look forward to collaborating or coordinating with other individuals, presses, and other organisations who have expertise, interest, or resources relating to any of the wide range of social forces and traditions pertaining to the Bouzingo or the communities among which they lived. Please contact us through this blog or at monoclelash@gmail.com

Due to Spam comments, we'll have to send you an invite to leave comments--just email and I'll add you to the list, or leave a comment at the mOnocle-Lash site linked above.

Letters by & Reviews of the Jeunes-France

Visual Art by the Bouzingo

Books by the Jeunes France / Bouzingo

Secondary Sources for the Jeunes-France